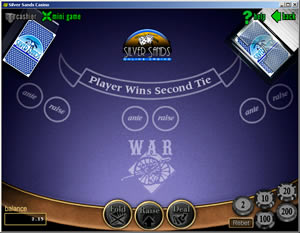 CARD VALUES
The card suits have no meaning in the game.

Deal
Clicking on the deal button after placing a bet starts a new game.

Raise
Clicking on the raise button will deal the player three "burn cards" and an additional card.

Fold
If the player and the dealer tie, the player can fold and the game ends. The player loses the amount wagered.