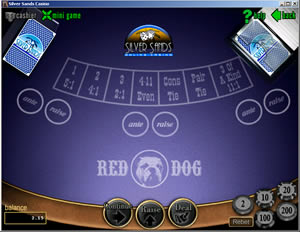 
Card Values, Spreads, and Payouts:
Suits of the cards have no meaning in the game.
The spread is the number of ranks between two given cards. For example, the spread between a five and an eight is two. The maximum spread is eleven.

Payouts for winning hands are based on the following table:

When the first two cards have consecutive ranks (for example, 5 and 6), the hand is a tie, and all bets are returned to the player.

Raise
Click the raise button to double the bet and deal the third card.

Continue (Don't Raise)
Click the continue button to deal the third card without increasing the bet.